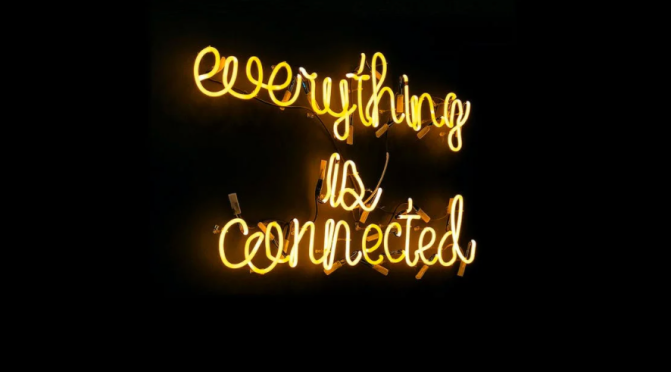 “You can’t connect the dots looking forward; you can only connect them looking backwards. So you have to trust that the dots will somehow connect in your future.”

They say that “everything happen for a reason.”

Truth be told, my younger self would automatically roll her eyes whenever someone would state this oh so clichéd phrase.

I was dismissive – believing that it’s just one of those things that people say to lessen the blow when you find yourself facing a disappointment or any type of failure.

Since then, I’ve completely changed my outlook on it.

Now, I find myself to be a total believer because over the years, I’ve had countless “lightbulb” moments that made it nearly impossible for me to remain a skeptic.

We’ve all experienced those incredible moments when we come to the realization that things that have happened in the past –  a series of events or occurrence that doesn’t seem to be remotely related to each other – somehow fall perfectly aligned and lead us to that very moment.

Despite the fact that these serendipitous moments occur quite frequently these days, each time it happens, I can’t help but be left utterly speechless – in a good way.

One of my most memorable “wow” moments happened  back in 2010 when I was living in China. May that year, I was hired as the calligrapher for a state gala dinner being hosted at the USA Pavilion at the World Expo in Shanghai.

Held every five years with each one located in a different country/city, the World Expo attracts millions of visitors who explore and discover pavilions, exhibitions and cultural events staged by hundreds of participants including nations, international organizations, and businesses.

To put it bluntly, it’s an event where each participating country gets to show off what they’ve got to the rest of the world.

Thanks to huge cuts on US government funding, if it hadn’t been for the generous contribution of  some of the country’s Fortune 500 companies and Mrs. Hillary Clinton (who was the Secretary of State at the time) rallying to gather the 60 Million USD that made the pavilion possible, the US would have been a no show – and that would’ve been a huge embarrassment for the world’s ‘superpower’.

The state gala dinner marked the opening night of the USA Pavilion and I was told that it was one of the very few state dinners to be held outside of the US.

It was literally a big “Thank You!” dinner held by the US government for all of the companies that financially contributed and made the USA Pavilion happen.

As such, the dinner’s guest list consisted of CEOs and dignitaries such as high-ranking ambassadors and diplomats.

The keynote speakers of the night were Mrs. Clinton  and Mrs. Indira Nooyi, Pepsico’s (then) CEO, a  formidable woman who was ranked the most powerful woman in business in the US for five consecutive years.

Despite how impressive the event sounded, what was more astounding is how I got the gig in the first place.

Well, I was not a professional calligrapher nor was I ever one prior. And no, you didn’t read that wrong.

As difficult as it was (and still is) to fathom, I managed to be hired to do a highly coveted job with ZERO working experience in.

What made it more (wonderfully) ironic was that I never actually applied for the job nor did I even know that the opportunity existed!

So how exactly did I get the job?

At the time, a good friend of mine was working for an events company that was hired to plan and execute the dinner gala. They had been working with the US protocol team for Mrs. Clinton for nearly a month when the team made a last minute request for a calligrapher based in Shanghai.

For one reason or another, their usual US based calligrapher was not able to travel with them to China. The team was flying to town within a week and would like to my friend to seek out calligraphers to choose from in advance.

And this is where I came in.

Though no one in their right mind would label me as a professional calligrapher, I had taken a calligraphy class back in the 7th grade (I was 12 years old) as an extra-curricular activity. Note that this class was the ONLY type of so called “training” I had for it.

While I never pursued it further, calligraphy was one of those things that just “stuck” with me. It felt natural and over the years, I had found it to be extremely useful when writing notes on “Thank You” cards for sponsors &  clients as well on “Congratulations” & “Happy Birthday” cards for friends and family.

My friend had received a couple of these cards herself and had mentioned that she liked my calligraphy. So, out of sheer desperation, she proceeded to call me.

You would think that I would jump at the chance to even be considered as an option for this extraordinary opportunity but the reality was that I was already in over my head with preparing a big fundraising event to be held just a day prior to the state dinner.

Nevertheless, my friend pleaded for me to share samples of my calligraphy skills to share with the protocol team. “You may not be what they’re looking for…” she said. I hesitantly answered “OK” thinking that there is just NO WAY they would pick me.

After all, the team had previously worked with numerous world-class calligraphers from all over the globe who actually have years of relevant experience under their belts.

Yet lo and behold, my friend called me a couple of days later and said reluctantly “So as it turns out, you are exactly what they are looking for…congrats…”. Knowing that another job was the last thing I needed at that moment, she uttered “I know that this is a BIG favor, so thank you.”

The weeks leading to the state dinner was more than manic.

Luckily, my office and the US Consulate were located just right across from each other. I found myself constantly running back and forth trying to make sure that everything I needed to do is ready for both events. There were lots of sleepless nights and I was beyond exhausted.

Long story short, though I had my doubts, I was able to keep it together. The fundraiser ended up being a big (and fun) success and everyone who came and participated thoroughly enjoyed the event.

With only about 2 hours of sleep, I was up on the crack of dawn on a Saturday to prepare for the state dinner. The protocol team wanted me on site for last minute calligraphy preparation and changes. As with any event, there were plenty of last minute alterations needed to be done.

On site, I found myself working at a VIP room along with the protocol team who by that time, warmly accepted me as a part of the team.

It was unbelievable how I found myself sitting down with the highly talented and accomplished people who made sure that everything is smooth sailing whenever Mrs. Clinton travels abroad. As the Secretary of State, that happened to be a whole lot.

The hours leading to the start of the dinner was a blur. At one point, I vaguely recalled a Michelin star decorated chef who they flew in from the states asking me what I wanted for lunch and all I could blurt out was that I wanted to burgers and fries.. (stressed out much?).

Fortunately, the whole event went on splendidly. The initial plan was that I could leave once the event began in the evening. But the protocol team ended asking me to stay for the event and to help them out to oversee the guests.

At the event (which I was definitely underdressed for), I ended up meeting some of the most influential and respected people in the world which included Mrs. Nooyi and Mrs. Clinton.

It was and still is baffling to me that someone who became the first woman US presidential candidate to be nominated by a major party, shook my hand, smiled and said “Great job on the event. Thank you.”

When it comes to that amazing moment, surreal is definitely an understatement.

How the hell did a calligraphy class that I took light years ago ended up giving me a once in a lifetime opportunity? But as I looked back, as strange as it was, the dots connected.

Whether it’s things that happened on a professional or personal sphere, be it good (getting  an awesome job) or bad (getting fired, break-ups etc.), I believe that they don’t happen by sheer chance.

The exact reason(s) why things happen – as random & confusing as it may be – may not be revealed to us for years to come.

However, it’s important to trust that as long as we are doing our very best, that life will unravel as it should. And eventually, the dots will connect…

Read More: Why You Should Be Making the Most Out of Opportunities

One thought on “Connecting the Dots”

Have something to say ? Share it here! Cancel reply

This site uses Akismet to reduce spam. Learn how your comment data is processed.

Inspirational Clip of the Week

Amisha Jan: A Neuroscientist on How to Deal with Difficult Emotions

“Life will give you whatever experience is most helpful for the evolution of your consciousness.

How do you know this is the experience you need?

Because this is the experience you are having at the moment…”

Atlas of the Heart