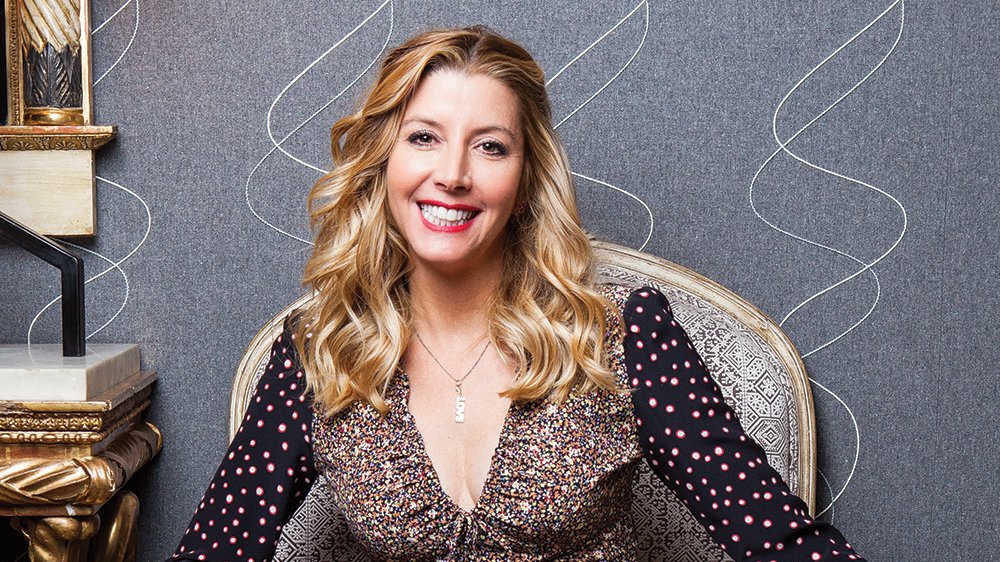 “Most of the reason we don’t do things is because we’re afraid to fail. I just made a decision one day that I was not not going to do things in my life because of fear…”

Famous for becoming the youngest self-made female billionaire, Sara Blakely is certainly a force to be reckon with.

She’s the founder of Spanx, the wildly popular intimate apparel company, which to this day she completely owns (It has no outside investors).

While she got the idea on the first Spanx product by cutting the feet off a pair of pantyhose and using it as a ‘slimming’ undergarment, she insists that the idea was actually a long time coming.

Why you asked? Well, just 2 years earlier, she was working at a dead-end job selling fax machines door to door and thought to herself that this can’t be all there is. She claimed that she felt as if she ‘was in the wrong movie’.

A big believer of the Law of Attraction, she then asked the Universe for an idea for a product that’ll enable her to help people. She made a promised that when that idea comes, she won’t squander it.

And good thing she kept that promise.

Sara continued to work full time while building Spanx, juggling multiple hats. It wasn’t easy but what kept her going was her belief in the product (as a fan of Spanx, I can genuinely say that her product is the best out there) and was relentless in getting Spanx known and seen by as many people as possible.

Thanks to her tenacity and her impeccable sales skills, she was able to get her ‘big break’ when Spanx was accepted by Neiman Marcus, one of her favorite department stores.

This, of course, is certainly not the whole story. There’s much that happened between then and now but one thing’s for sure, Sara is definitely an inspiration that we all can learn from.

With that, below’s a compilation of empowering quotes by one of my all-time favorite people, Sara Blakely. Enjoy!

“With every obstacle that has happened to me in my life, my brain immediately says, ‘Where is the hidden blessing?’ In starting a business and growing a business, every day is learning how to manage obstacles.”

“It’s important to be willing to make mistakes. The worst thing that can happen is you become memorable.”

“When I was a child, my father used to encourage my brother and me to fail. At the dinner table, instead of asking about the best part of our day, he would ask us what we failed at that week. If we didn’t have something to tell him, he would be disappointed.

I didn’t realize it then but what he was doing was reframing the definition of failure. Failure no longer means not succeeding, failure is not trying.

It helped us become less fearful of going out of comfort zone.”

“I think failure is nothing more than life’s way of nudging you that you are off course. My attitude to failure is not attached to outcome, but in not trying. It’s liberating.

Most people attach failure to something not working out or how people perceive you. This way, it is about answering to yourself.”

“Most of the reason we don’t do things is because we’re afraid to fail. I just made a decision one day that I was not going to do things in life because of fear.”

“Most of us want to tell our coworkers or friends, or husbands or wives, our ideas.

For what reason? We want validation.

But I feel ideas are most vulnerable in their infancy. Out of love and concern, friends and family give all the reasons or objections on why [you] shouldn’t do it. I didn’t want to risk that.”

“If somebody can do something 80% as good as you think you would’ve done it yourself, then you’ve got to let it go!”

“The smartest thing I ever did was to hire my weaknesses.”

“You’ve got to visualize where you’re headed and be very clear about it. Take a Polaroid picture of where you’re going to be in a few years.”

“Where I get my energy is: ‘How can I make it better?”

“I feel like (success and) money makes you more of who you already are. If you’re an asshole, you become a bigger asshole, if you’re nice, you become nicer.”

“Money is fun to make, fun to spend, and fun to give away.”

“We don’t have the luxury of time. We spend more because of how we live, but it’s important to be with our family & friends.”

“The thought of my mortality – I think about it a lot. I find it motivating. It can be any time that your number’s up.”

“I pledge to invest in women because I believe it offers one of the greatest return on investment (ROI). I am committed to the believe that we would all be in a much better place.

If half of the human race (women) were empowered to prosper, invent, be educated, start their own businesses, or run for office. Essentially, they’ll be given the chance to soar.”

“I think my story says that, when women are given the chance and the opportunity, that we can achieve a lot. We deliver…”